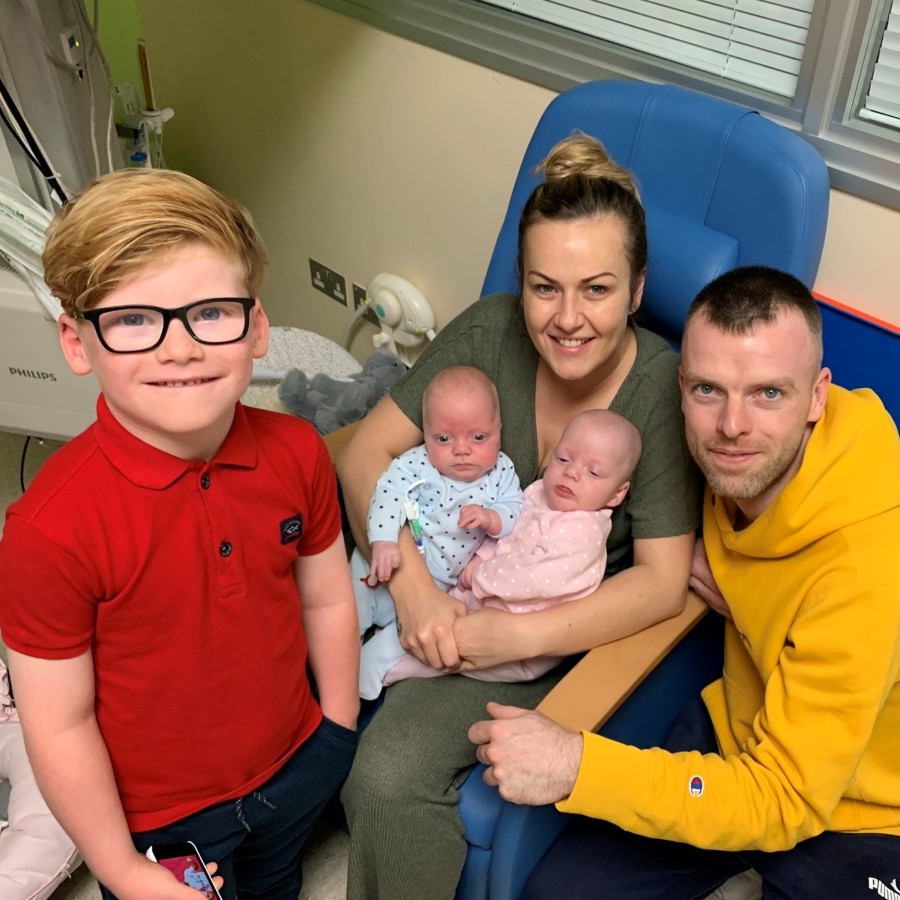 The Halls credit the ‘real life superheroes’ at our neonatal unit for ensuring their children are reunited for the festive period.

Arlene Hall is thanking the team at the Royal Hospital for Children in Glasgow – as well as those at Wishaw General Hospital – for the care they have given to twins Ollie and Orla (8 months), who were born prematurely earlier this year.

She has credited their dedication and expertise with both twins being reunited with each other – as well as older brother Alfie and dad Jason – in time for the festive season.

The twins were born in April, at just 26 weeks plus three days’ gestation, at Wishaw General Hospital, but had to be separated when Ollie was admitted to Glasgow’s Royal Hospital for Children almost immediately for specialist treatment. 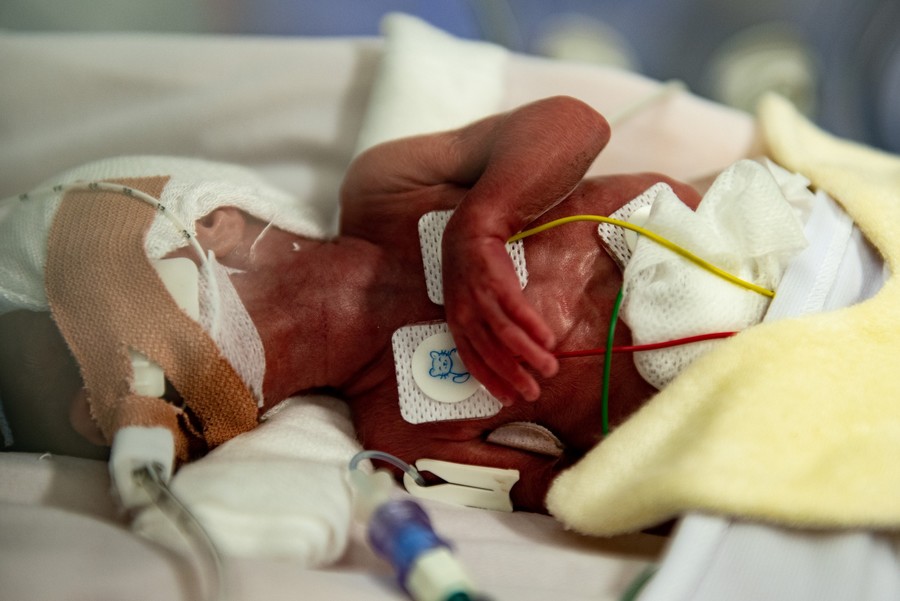 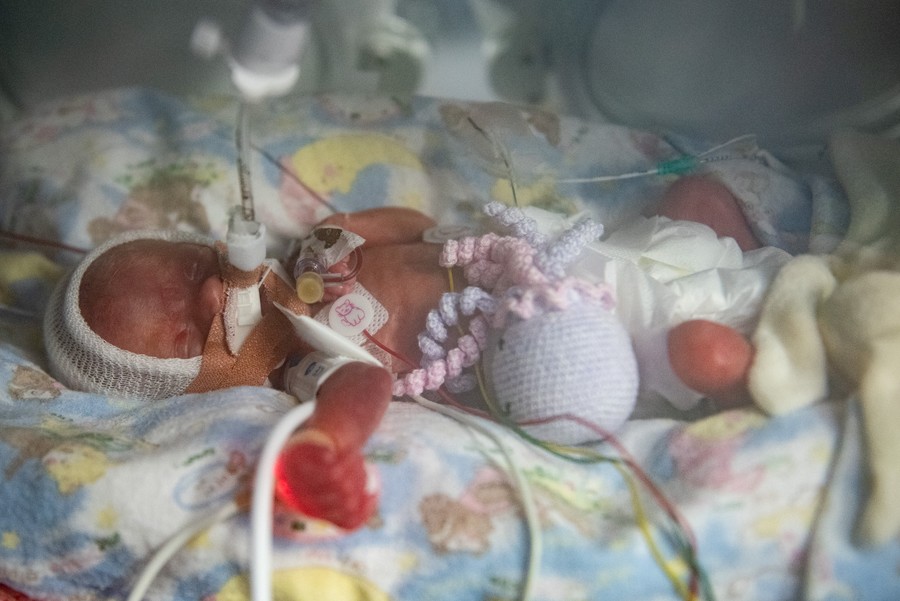 Arlene said: “When I went into spontaneous labour with the twins I was at work – and once I realised exactly why I was experiencing pains, I was absolutely terrified, thinking it was too early for my babies to survive coming into the world.

“Thankfully Ollie and Orla arrived safely, but we soon realised things weren’t going to be as straightforward as expected when quickly after his birth, Ollie had to be transferred to the Royal Hospital for Children for emergency bowel surgery. Gas had been escaping from his tummy and bowel, but there was no obvious explanation for it. At first, the doctors thought it was necrotising enterocolitis (NEC), a really common condition in premature babies – but after two weeks on antibiotics he had to be taken to theatre for investigative surgery.

“It was really scary, especially given that Ollie was only 860 grams – the smallest baby born in Wishaw General in April. During surgery they found a twist and perforation in the bowel and, as a result, he had his first stoma created and was allowed to recover, grow and thrive before any reversal took place.

Ollie spent seven weeks in the Neonatal Intensive Care Unit (NICU) at the Royal Hospital for Children whilst, at the same time, his twin sister Orla was at Wishaw General Hospital – and Arlene and Jason had to retain a sense of normality for older brother Alfie, who was still attending school in Wishaw. 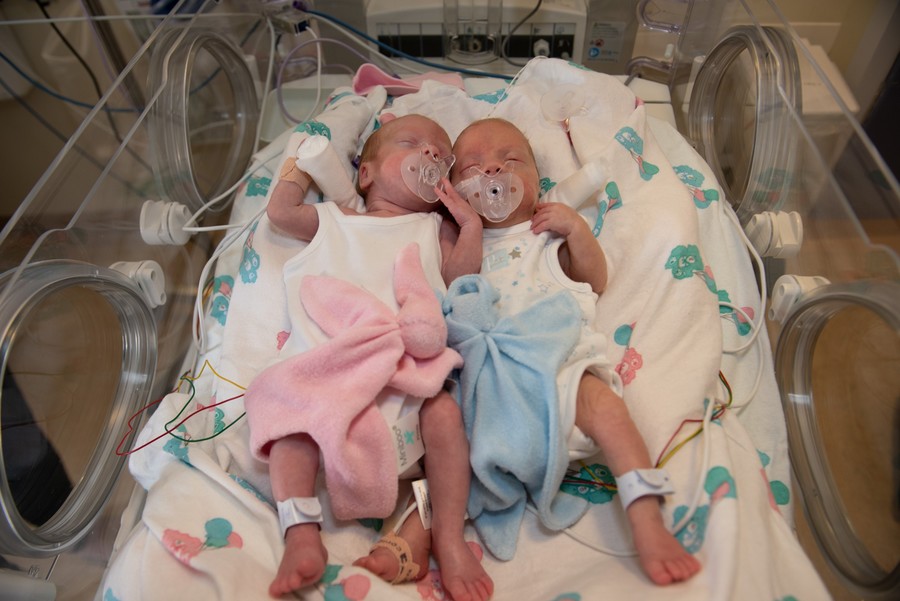 Arlene continued: “It was a very difficult time – I don’t know how we did it some days, but we had to fight for our twins whilst keeping things as normal as possible for Alfie. Thankfully, the neonatal units are like one big family and we were just so grateful that our babies were in such good, caring hands.

“Ollie was finally reunited with Orla in May, and they finally came home together in July – it was such a fantastic feeling to bring them home and to have the chance to be a family. But our new routine didn’t last too long, as Ollie was admitted back to the Royal Hospital for Children in August.”

Little Ollie was booked in for a routine loopogram – a diagnostic test to check the function and size of his bowel –  which resulted in a nine-week hospital stay, just two weeks after getting home, after further complications were discovered.

Arlene added: “We couldn’t believe that a routine overnight appointment turned into another nine weeks in hospital for Ollie – he had been through so much already and he and Orla had spent more time apart than together in their short lives already. However, we can’t thank the staff enough for discovering the complications and working hard to give Ollie the treatment he needed.

“Whilst in for the loopogram, the team discovered that two bi-lateral hernias Ollie had already were strangulating his testicle, which meant he needed emergency surgery. During his operation, both hernias were repaired, as was his patent urachus [an opening between the bladder and navel] – and his stoma was reversed.

“Throughout his recovery it became clear the stoma reversal hadn’t worked because of his existing scar tissue collapsing on itself – so he had another stoma created. No matter what Ollie experienced, he just fought the whole time. He really is a little miracle boy who, along with his beautiful brother and sister, helped Jason and I survive the rollercoaster that is neonatal life.

“We realised just how much it takes to ensure babies who need special care get the chance at life they deserve. Absolutely everything about the neonatal unit at the Royal Hospital for Children is special – the staff and volunteers from Glasgow Children’s Hospital Charity didn’t simply treat our baby boy, they truly cared for him and for me and the rest of the family. It’s because of them that we are getting to spend the festive season together.

"That’s why we’re so supportive of the Neonatal Appeal by Glasgow Children’s Hospital Charity. Every baby deserves the best chance at life, and the money raised will go towards more of the most state-of-the-art equipment to ensure that’s the case."

To show your support, please click the button below to donate. Thank you.