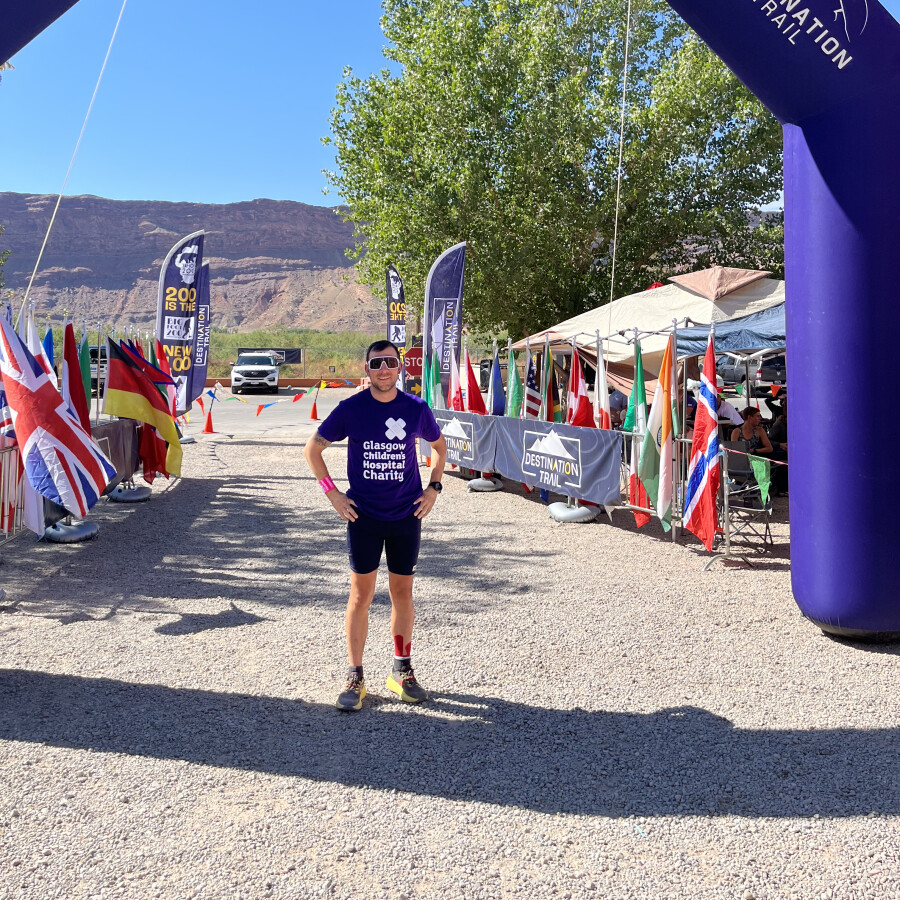 Ultra runner Chris Burnett is the first ever Scot to complete Moab 240, one of the most gruelling tests of endurance and mental fortitude in the world of ultra-running, after being inspired by nephew Benjamin.

Chris took on the challenge to raise £4,000 and counting for Glasgow Children’s Hospital Charity after the care little Benjamin received in the NICU when he was born premature and remained in hospital for the first 131 days of his life.

Moab requires runners to cover 240 miles of Utah desert, following the Colorado River south towards the Abajo mountains, then northeast to La Sal and finally returning to the town that gives the demanding challenge its name.

When every runner sets off, a timer begins. 112 hours. Those who do not make it to the finish line in time are rendered to have not finished — and the clock stops for nothing. Including sleep.

It is so tough that any participant must post evidence they have already completed a qualifying trail run of eight hours or more. Only 250 people are permitted to enter.

Chris said: “Until recently I only participated in physical challenges as a hobby, for me, and to set positive examples for my three nieces. That changed when I became an uncle for the fourth time and to my first nephew, Benjamin.

“Benjamin was born prematurely and in the early part of his life required constant care and attention at the Royal Hospital for Children for more than 100 days.

“Since then, I’ve seen what you guys take care of in the background that I didn’t even take into account. The focus from the healthcare point of view is on making the baby ‘better’, but Glasgow Children’s Hospital Charity steps in with things in the background.”

We provide a range of projects for families dealing with a premature baby being treated in the NICU, from MiniBoo comforters that allow babies to smell their parents when close contact isn’t possible, to the vCreate video portal service which gives parents video updates from hospital when they can’t be by their new arrival’s side all the time. 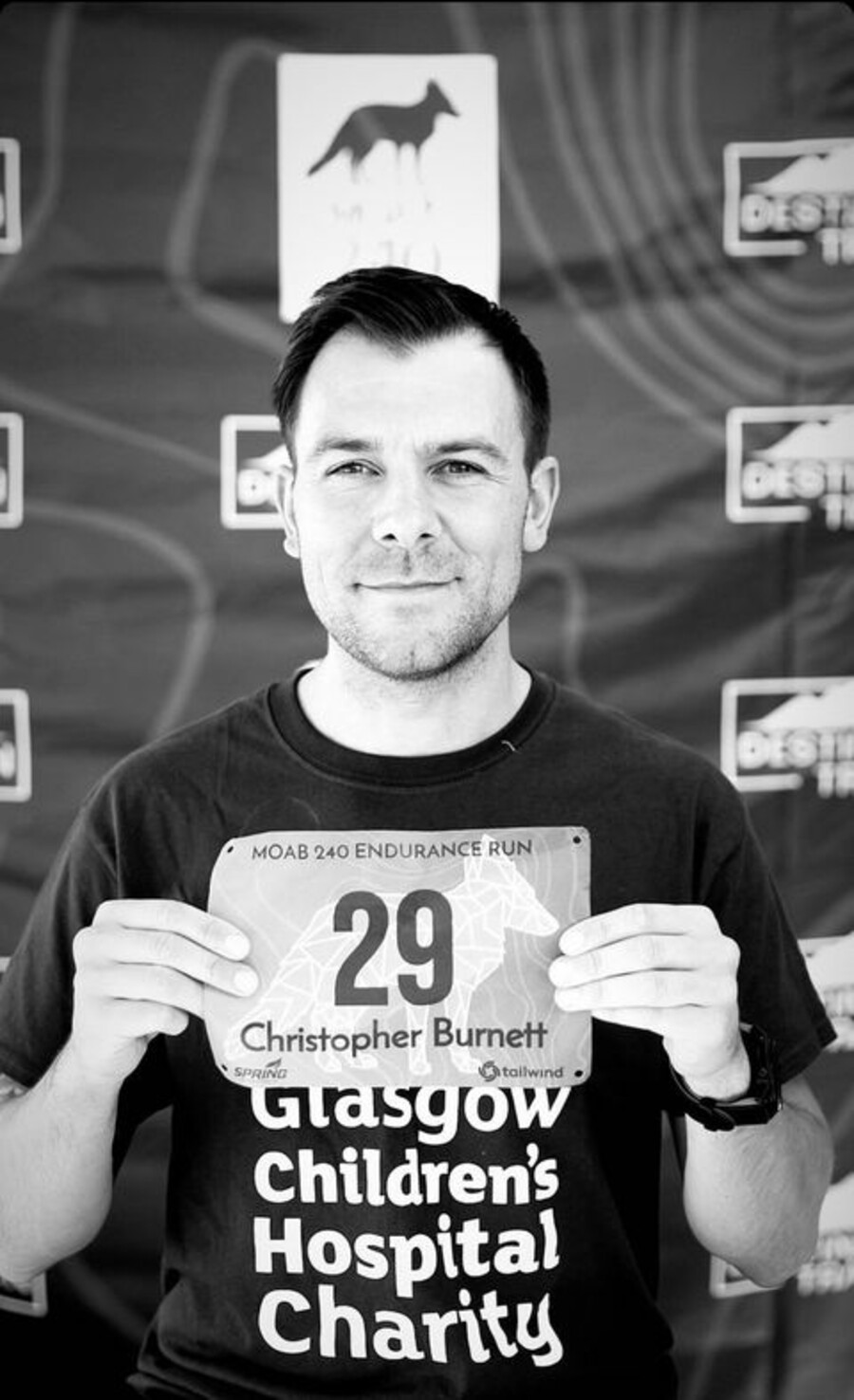 “I now feel that through sport I can raise awareness and finance to help aid the great work the charity does,” Chris, who has also taken on marathons in Manchester and Louisiana and longer distances elsewhere, continued.

He had planned to take on the 96-mile West Highland Way before an injury put paid to those ambitions just months before Moab. Chris recovered well, however, and flew to the States for the run of a lifetime as he kept his little nephew front of mind.

“My brother’s partner had what they thought were complications. They had to deliver Benjamin early to find out what the issue was.

“He was born in November when he was due in February and weighed 769 grams. From there it was hospital every day trying to help get him through it. It was 131 days he was in hospital for in total, and he’s now been home for a few months.

“I was ecstatic when we got the call from my brother that Benjamin would be going home the following week. It was amazing finally getting to meet him for the first time.

“I changed my screensaver on my phone to a picture of my nieces and nephew so that I could look at it when times got hard.”

We caught up with Chris as he rested up in Atlanta, Georgia with family before heading back across the Atlantic.

Has it sunk in what you've accomplished?

“In a way, it has started to sink in. It was a weird feeling. Going through the race, everything was going so well, especially what happened in the summer with the injury during the West Highland Way.

“I thought: ‘I’ve got a full team here, I need to get to 40, 50km.’ I’d not run that far since the summer. First day I felt good, and even better on days two, three and four. It felt too easy in a way, which is a weird thing to say! 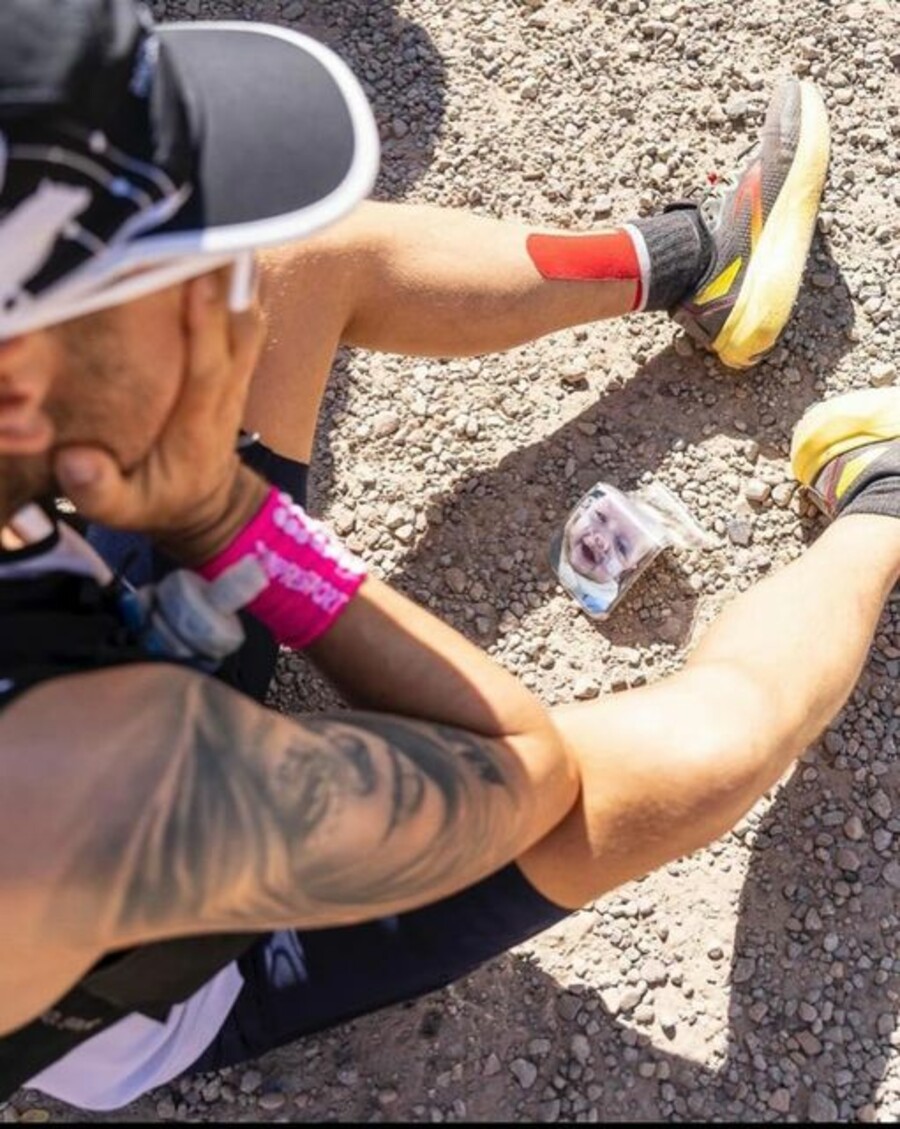 “Then I rolled my ankle, got to the last checkpoint and I had to walk 40 miles home. It began to sink in at that point; ‘we’re near the end’.

“I did the maths in my head - ‘we’re going to be walking for 16 hours here’. But I just thought about my nephew and other kids in hospital for months at a time and 16 hours is nothing compared to that. Then the hours went by pretty quickly.”

How did it feel finally crossing the line?

“Luckily, because I finished early morning in Utah, my family were back home watching on YouTube as I finished. I immediately just sat down and took the picture of Benjamin out.

“I realised the weight and stress I carried from the West Highland Way had turned to pride from not only finishing but being able to do it after what was quite a hard one to swallow after the summer. I feel like I did myself and the charity justice."

“That first leg was the hardest part with no pacer. I got to 30km, a distance I knew I could run pain-free, and then I didn’t see my team until 115km.

“It got very hot and I ran out of water quite early during a marathon section where you have no aid. I had a lot of time to think!

“I had been in worse, but dealing with dehydration, the isolation, being in the unknown with regards to my knee... I just tried to focus on getting to the next aid station.

“To sum up what I was thinking about, it almost felt like the race was over when I got through that first day pain-free. Without my team, though, I'd probably still be out there. I'd like to thank my pacers, Thomas Augaitis and Steven Craig; my physical maintenance team, Vlad Bosca and Dr Bob Bacon; and lead crew, Billy Gordon."

How do you sleep with the clock ticking?

“I got the nickname ‘the Sleepy Scotsman’ on the trail, because people were taking 30-minute naps whereas, because I can run and push forward, I slept for six hours. Some people don’t get that much sleep for the whole week!

“I started running by all these people and the first thing they ask is: ‘How are you doing? Did you sleep?’ I was like, ‘yeah, for six hours’. And they see you both at the same point in the race!

“I ran hard and rested hard, taking it as a stage race. That got me right up to the front of the field until the ankle went.

“There’s a lot of high energy between the runners which you might not expect. But then it goes from one end of the spectrum to the other, where people who went all day and night were like zombies."

It sounds like you fancy going back to the starting line and doing it all over again! 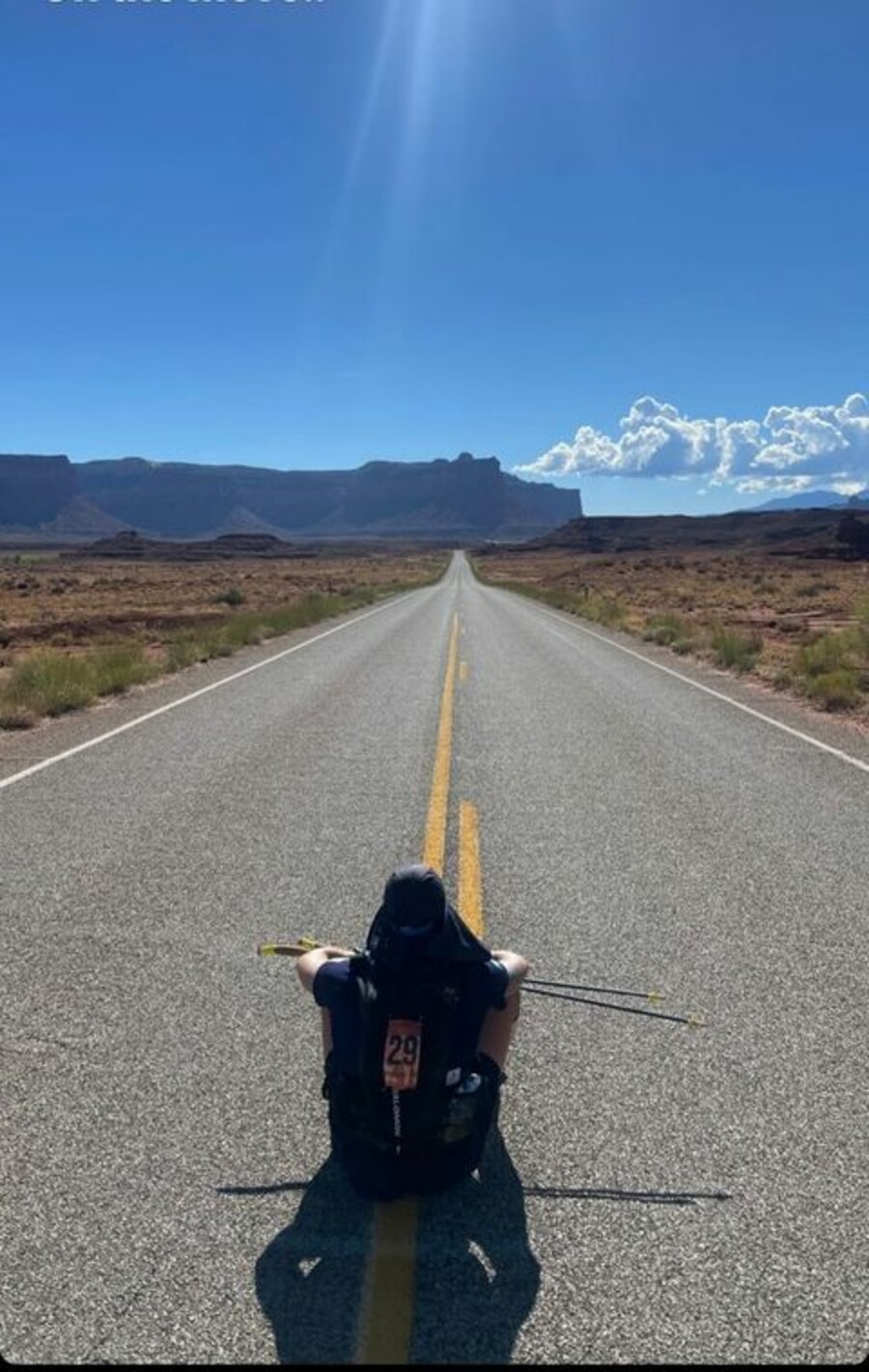 “My physiotherapist told me after day three, during a massage, ‘if you walked into my clinic, I wouldn’t know you’d ran 150 miles. There must be something in your brain that lets you switch off and let your muscles go.’

“Something, or someone, was watching over me that weekend. It’s weird how well it went because in the build-up I was incredibly nervous given my physical condition.

“I hadn’t managed loads of things they tell you to do in training, and I really did think I was going to let everyone down.

“I’m trying to figure out what it was, but it felt like something was watching over me. By day three I felt indestructible. When the ankle thing happened, it was like, ‘well, I had to feel some difficulty.’"

Now Benjamin, when he grows up, can look back at that photo...

“That’s incredibly special. I grew up looking at a photo of my great-grandfather, who cycled from Glasgow to Blackpool. I used to look at that photo and think he was superhuman. Now I have a photo like that to show my nieces and nephew to show them if you have the drive you can achieve things that seem impossible.

“My great-grandfather cycled around the same distance I ran! So hopefully Benjamin will look at that and turn it into something special.”

Take on your own fundraising challenge!
Read Next