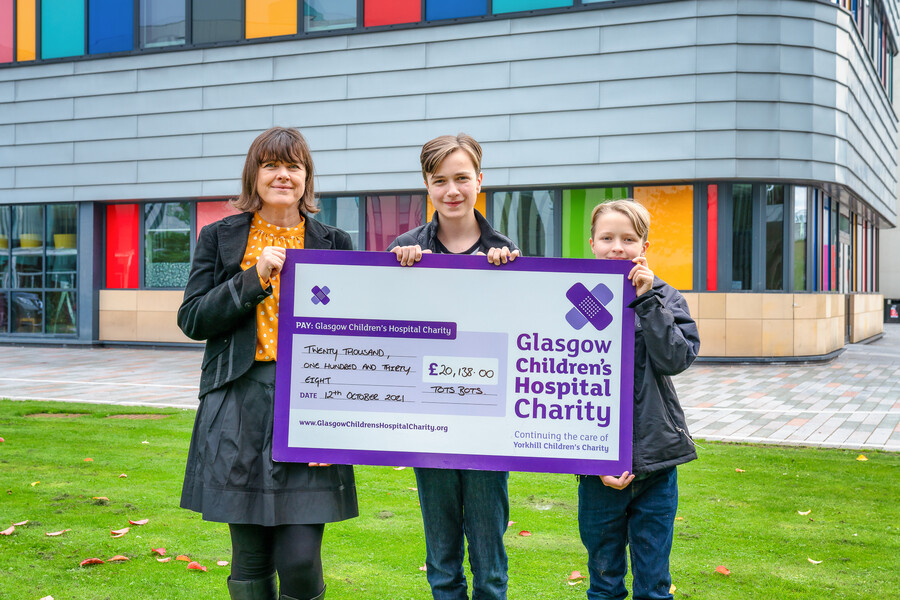 Glasgow based reusable nappy manufacturer TotsBots has donated over £20,000 to Glasgow Children’s Hospital Charity from the sale of face masks during the pandemic.

Known for its locally-produced and eco-friendly baby products, the award-winning business and supplier to the Scottish Baby Box, was inspired to turn its hand to mask manufacturing when the pandemic hit to support the high-demand for face coverings.

Having had first-hand experience of the children’s hospital in Glasgow, TotsBots founders, Magnus and Fiona Smyth from Thornhill in Dumfriesshire, planned to donate a percentage of profits from the sale of their children’s face masks to Glasgow Children’s Hospital Charity.

Fiona Smyth, Co-Founder, TotsBots, said: “Our son Darach who is now 14, was born with Pulmonary Atresia and VSD, a fairly rare congenital heart defect that was diagnosed at birth. We first met the team when he was admitted at 12 hours old as he had to have life-saving surgery only a few days later.

"It was absolutely harrowing; understanding and coming to terms with the diagnosis, watching your very sick baby go through heart surgery and having to trust a group of strangers to help your baby survive."

“The paediatric cardiac team at Glasgow Children’s Hospital feel a bit like an extended family as Darach has spent so much time up there. He has had several open-heart surgeries and in the Summer of 2019 he developed Endocarditis, a life threatening infection in his heart that meant a prolonged stay in hospital and yet another open-heart surgery.

“When we walk on the ward and are met with the well-known faces that have cared for Darach since he was born and have supported us through some of our darkest moments, we oddly feel at home. It is such a cliché, but we always say this after a surgery; we don’t know how they do it, day in and day out. The medical teams are such an amazing bunch of people and we are so grateful to them for saving our boy’s life and on more than one occasion.

“Words really cannot communicate the deep sense of gratitude you feel when you say your goodbyes to the team as you head home after another successful surgery. You just feel so indebted to everyone, so it’s nice to be in the position to do something to give back, especially to the charity where we have experienced first-hand the work that it does.

“The Charity funds the hospital’s Play Programme, and Claire - one of the play leaders - came in to visit every day when Darach was in with Endocarditis in 2019. She built such a strong bond with him, helped keep his spirits high and made him feel cared for, it goes such a long way. He still talks about her now. Raising funds for something that makes such a difference to kids and families during difficult times really is a privilege.”

Glasgow Children’s Hospital Charity - which raises funds to support seriously ill children in hospital – is marking its 20th Anniversary this year, having funded more than £39million of enhancements since 2001 to support young patients, their families and NHS teams across Glasgow and the West.

Kirsten Watson, Chief Executive, Glasgow Children’s Hospital Charity said: “We can never say thank you enough to local businesses like TotsBots who, during a time of such great uncertainty and unprecedented challenges, have gone above and beyond to support the Charity. The generosity shown by TotsBots with this kind donation is truly incredible and will make a remarkable difference to seriously ill children from across Scotland by helping to fund our life-changing hospital projects and support services.”